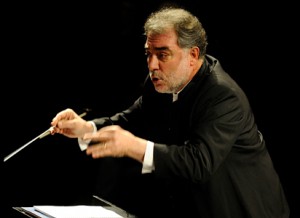 The Croatian conductor Ivo Lipanović was born in Dubrovnik, Croatia. After his first musical education in Dubrovnik he studied conducting and piano at Zagreb Academy of Music, and afterwards he specialized conducting with Mo Lovro von Matačić.

At the Competition for young conductors in Zagreb 1986 , he won the First prize, and subsequently the same year, he was appointed Chorus Master and Conductor at the Opera of the Croatian National Theatre in Split. The first couple of seasons he was an assistant in such of productions as Nerone, Boris Godunow, Guglielmo Tell and Vespro della beata Vergine. As Opera's conductor he debuted 1987 with La Traviata to continue with Rigoletto, Il Trovatore, Don Carlos, Nabucco, Aida, I Lombardi alla prima crociata, Tosca, La Boheme, Madama Butterfly, Gianni Schichi, Cavalleria rusticana, I Pagliacci, Faust, Carmen, Falstaff, Luisa Miller… as well as numerous Croatian and other Operas, Operettas and Ballets.

Since 1997 he has been principal guest conductor and lecturer on specialized courses for young orchestral musicians and young singers in Teatro Lirico Sperimentale in Spoleto and he made a new productions there: Faust, Werther, Le Nozze di Figaro, Cavalleria rusticana and Wolf-Ferraris Il segreto di Susanna.

In October 1999 he debuted in Deutsche Oper Berlin with Carmina burana and after a great success he was reinvited in January 2001 for Verdi's Falstaff, celebrating one hundred anniversary of Verdi's death.

Also with great success he conducted Eugene Oneguine in Oper du Nice (March 2000) with famous cast including Barbara Hendricks, Vladimir Chernov and Matti Salminen. After this production, he started an intensive artistic colaboration with Barbara Hendricks, and they made many concerts together in Suisse (Bern),Croatia (Zagreb) and France (Nice, Strasbourg, Toulouse, Merignac, Avignon, Lyon and Paris-Chatelet).

From November 2001 until Jun 2003 he was appointed as General Music Director in Ankara State Opera and Ballet. In October 2002 he was in Ottawa conducting the National Arts Center Orchestra in Carmen, 2004 he performed Madamma Butterfly in Brescia with Orchestra and Chorus of the Arena di Verona celebrating one hundred anniversary of final version of the same Puccinis opera, and 2005 he conducted new production of La Traviata in Teatro Filarmonico in Verona. Since 2006 he is been working as a free artist and next four years he conducted numerous new productions in the own country, such as Un Ballo in maschera, Il Trittico, Manon Lescaut, Aleko, Cavalleria Rusticana, Prodana Nevesta, Macbeth, Eugene Oneguine etc. In 2009 he conducted the new production of Carmen in Teatro di Messina in Sicilia, and in Teatro luglio musicale Trapanese in Trapani he conducted Cavalleria/Pagliacci 2010, Tosca 2011 and Carmen 2014.